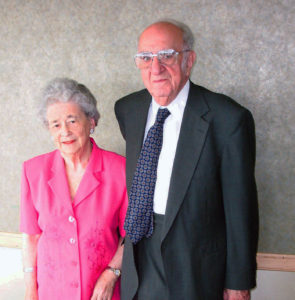 Ursula Sarah Weil and Martin Levy were from small towns in Germany separated by only 5 km. Both the Weil and Levy families attended synagogue in Borgentreich where the Weils lived. Martin had his bar mitzvah there. Martin came to Butler, Missouri in 1936, Ursula to New York in 1940, where they each began to remake themselves and their lives. When Martin’s parents, Solomon and Rosa Levy, immigrated to the US in 1941, they smuggled with them a several hundred year old torah; none of the synagogues in Kansas City needed the torah, so it was given to a congregation in Joplin, Missouri, where it still remains. Ursula’s parents, Carl and Selma Weil, perished during the Holocaust.

Ursula, renamed Judy, and Martin were married after World War II. They lived and worked in Butler amongst other family members who had similarly emigrated from Germany, raising two sons, Charles and Mark, and having three adored grandchildren, Benjamin, Alexander, and Rachel. During 62 years together, Judy and Martin always remembered their Jewish heritage, and how this identity forced them to flee their homeland. They worked hard at belonging, at being Americans. With no Jewish place of worship in Butler, Judy and Martin became long-standing members of B’nai Jehudah for remembering their background, respecting their families, and perpetuating their heritage.

In respect of their families and to honor this history while looking to the future Martin and Judy Levy provided for tributes within their final wishes to the Jewish Community and the Temple B’nai Jehudah of Kansas City. They would have liked to see these funds used for helping those in need, in remembrance of their hopeful spirit, as final mitzvahs.